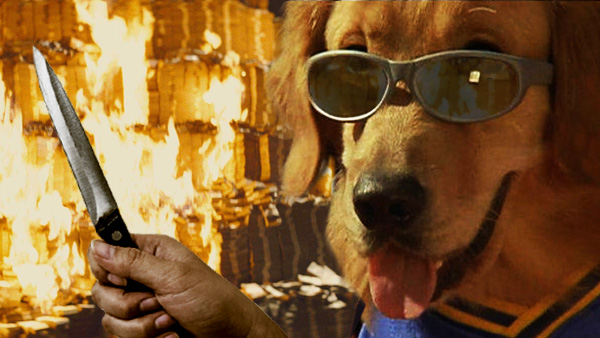 Christopher Nolan has today announced he is working on the first of what he hopes to be a trilogy of Airbud movies, in a reboot he says will be a “Darker, more gritty” take on the legend which will be “more in line with a post 9/11 world.” The film will see a whole new cast take on the roles, with a trained Alaskan grey wolf pipped to take the leading role of Bud the basketball playing dog, and Michael Cane expected to take on the role of Timmy, Bud’s owner, in an attempt by Nolan to show that a series about a gifted sports playing dog doesn’t just have to be a children’s film.

However, Nolan says he will be seeking to play down Bud’s sporting prowess in the films, instead looking to explore the deeper story behind the characters and their motivations. “Bud’s superhuman ability to play sport, from basketball, to baseball to Aussie rules football in that god awful fifth sequel, that’s something audiences are already familiar with. They’ve heard that story a thousand times. But what we’ve never really explored is Bud and Timmy’s origin stories.

“We know Bud was originally owned by a psychotic clown who tried to kill him, but we never get to find out, what happened to that clown? Did Bud seek revenge? Do his particular set of sporting skills extend to the use of hunting rifles and tracking down old foes? And what about Timmy? In the first film we learn that his father had recently died in a plane accident, but was it really an accident? Or was this clown somehow involved? And what effect did it leave on Timmy to be shown up again and again by a dog? Eventually that’s going to take a toll on your psychology, to see your dog move past you, join the major league and eventually lose touch with you as he’s swept up in fame, glory and women, while you sit at home drinking each night, resenting your dog’s success as a way of making excuses for your own failings. I think that’s where the real story lies.”

Greenlit by Warner Brothers, the film is reported to have a budget of over 50 million dollars, largely owning to Nolan wanting to be authentic in the film, and not lean too heavily on special effects. “I didn’t want this to just be another Hollywood blockbuster that ultimately looks like a video game cutscreen. When I see Bud shoot that final hoop, I want that to be a real dog who really does play basketball at a professional level, not some CGI model that looks like he’s been photoshopped into the frame. And likewise when Bud pours gasoline over that giant pile of cash and sets it on fire to demonstrate to the Mob bosses that he’s not your average petty criminal, I want that to be real cash and real Mob bosses. I want to see the look of fear in their eyes as Bud takes out their cronies one by one with a semi-automatic pistol, and the Mob leaders realise that they work for Bud now, that Bud is running this town. That’s the kind of movie people want to see. One with heart.”

AirBud: The Revenge is slated to hit cinemas this Christmas