WRITTEN BY
Angus Thompson and James Edwards
For The Chaser 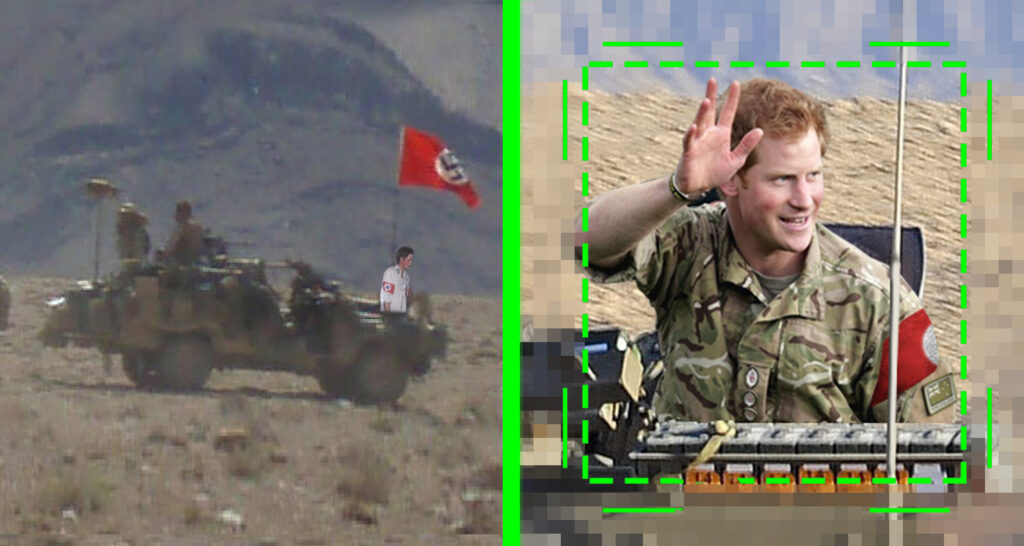 By Angus Thompson and James Edwards

New photos leaked to the ABC this afternoon have for the first time revealed the identity of the driver of the tank condemned for flying a Swastika flag in Afghanistan in 2007. Using new photo-enhancing technology, investigators were able to identify the driver, revealing him to be none other than known Nazi sympathiser Prince Harry.

Officials from joint military forces in Afghanistan have confirmed that Prince Harry secretly packed the swastika flag, along with his famous Nazi uniform, and a favourite photograph of famed Nazi, King Edward VIII, to bring on his tour to Afghanistan in 2007.

“We tried to stop him,” says a general who asked not to be named, “But he pointed out they were all just sentimental family heirlooms, which are technically allowed under the rules. Also his gran could have me beheaded for looking at her the wrong way, so I wasn’t about to argue with the guy.”

However, members of Harry’s troupe have sought to defuse the situation, explaining that the flag was simply a “sick joke” and was not in any way reflective of Harry’s personal views. “Those special forces guys, when their not doing meth and threatening the rest of us, their actually pretty hilarious,” explained one of Harry’s colleagues. “Like that time they blindfolded those prisoners and told them not to move or they’d fall off a cliff. Sounds pretty morbid when I say it out loud, but I guess you had to be there.”

The revelation that the driver was not an Australian national has failed to defuse tensions in Canberra, with politicians pledging to come down hard on the military for allowing contraband items like camera-phones to be snuck onto the battlefield.

“It’s an absolute outrage”, commented Prime Minister Malcolm Turnbull this morning, “When I found out that the people we’d hired for a job that revolves around shooting other people weren’t all morally sound, I was shocked! From now on we’re going to be much more picky about the people we recruit through banner ads on 9gag.”