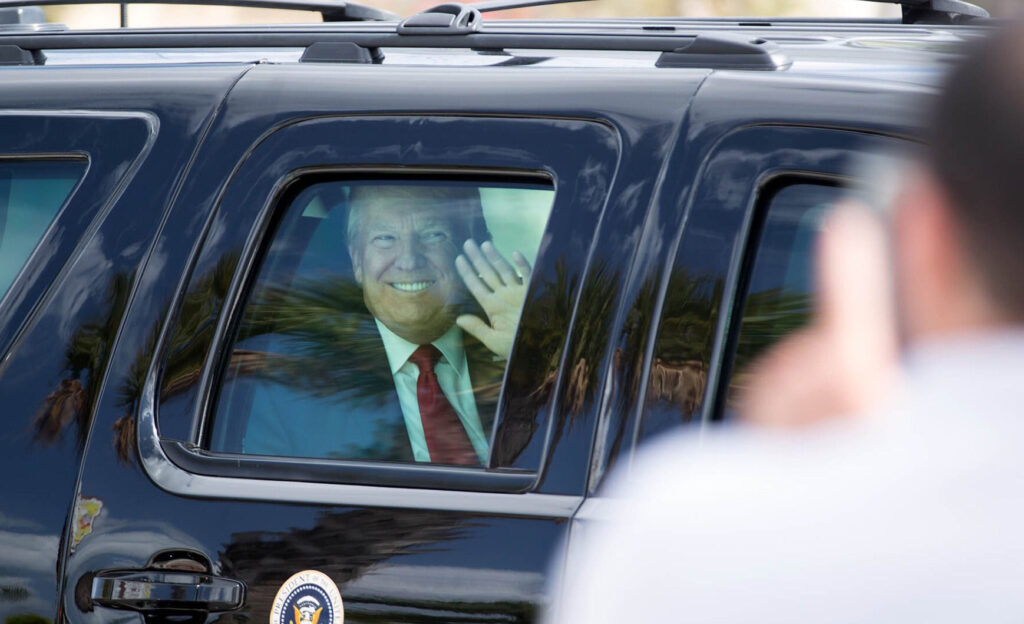 Donald Trump has today consoled the grieving families of the recent Florida school shooting, after the President informed the bereaved parents that their children are still very much alive in the alternative reality that he inhabits inside his head.

Speaking through a crack in the window of his bulletproof car this evening, Trump wove the families a stunning and heroic tale in which he personally rushed into the Florida school mid-shooting and tackled the shooter, saving the children inside – interspersed with various scenes he half-remembered from the movie Rambo.

“The guards there were completely useless, what kind of wimp runs away from combat!?” compained the man who famously dodged the draft five times. “If I were there I would have used my blackbelt Judo skills to sneak into the vents into the school, working my way through them using photographic memory of the school floorplan, before dropping silently behind the shooter and putting him in a sleeper hold, as all the children applauded and told how impressive my rippling six-pack is. Also I would have a talking dog.”

“But that’s just the kind of guy I am, never afraid of a bit of danger,” said the man who has an entire arm of government dedicated to his 24/7 protection. “You know if I heard a place being shot up, I really believe I’d run in there, even if I didn’t have a weapon. After sending in a few teachers first to distract the guy though, of course.”

“Some people are just soft though,” said the 239 pound man who spends his nights picking fights on Twitter while eating KFC in his silk draped bed. “It’s a shame we can’t all be brave war heroes like me.”

Trump then cut the interview short and fled the scene crying, after somebody in the crowd pointed out that his hands were slightly smaller than average