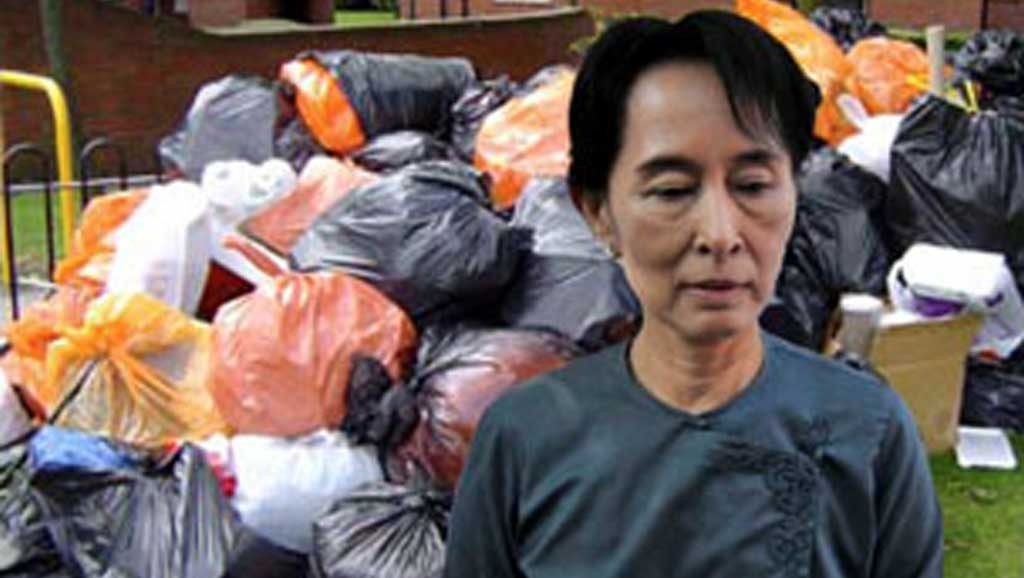 After Burma’s military junta finally ended her house arrest, Daw Aung San Suu Kyi began her long-awaited freedom by stacking fifteen years’ worth of rubbish outside her Rangoon home. As she piled several hundred cardboard boxes on her doorstep, the leader of the National League for Democracy thanked her supporters for their constant support, and Guido’s Pizzeria for its constant deliveries.

The assembled throng were unable to see their hero over the enormous bundles of real estate brochures and pamphlets reading “Lose Weight Now, Ask Me How”, but the Nobel Prize winner gave a stirring speech promising to lobby the government for freer elections and tougher restrictions on junk mail.

Now that she’s free, Suu Kyi says her first journey will be to her video shop, to return a VHS copy of Romancing The Stone. “I usually say that I don’t want special treatment,” she said. “But you’d think Rangoon Blockbuster could be more flexible about my $4700 late fee.”

She then plans to pick up her dry-cleaning and pay the final instalment on a Windows 95 laptop which she put on lay-by three months before her arrest.

In an interview with Australian media, Suu Kyi says she’s so delighted to be free that she even enjoyed her phone conversation with Kevin Rudd.

“I also enjoyed talking to Julia Gillard,” she said. “Although I had to break my policy of refusing to acknowledge unelected leaders.”

The democracy activist is also looking forward to a visit from her son, who lives in London. “Whenever he calls me, I always ask him when he’s going to visit his poor old mother,” she said. “Although he’s had a pretty good excuse for the past 15 years.”

In an attempt to negotiate political reforms, Suu Kyi is now trying to find common ground with the military junta. Since her most recent incarceration resulted from an uninvited American activist swimming across a lake to her house, Suu Kyi now agrees with the generals that foreigners should not interfere in Burmese politics.

For his part, Burma’s reclusive leader General Than Shwe says he’s glad that his opponent is out. “It’s such a shame her sentence forced her to just miss our recent elections,” he said. “Although something tells me that even if she had run, the NLD would have received the same 0% of the vote.”